Get the engine running in The Amazing Money Machine™, the videoslot with a dynamic reel format and up to 60 paylines. The Money Machine can randomly throw Wild and Mystery symbols on the grid in the base game, while the Respins round adds a new Respin for each Money symbol that hits. Run the turbine at full capacity in the Jackpot bonus game that works based on a pick-and-match rule and win one of the four available Jackpots!

RTP
96.42%
Max Multiplier
5100x
Reels x Rows
5 x 3
Lines
10
Release Date
May 6, 2021
Upcoming Tournament
The tournament with this game starts soon! Join it for free and have a chance of winning real cash prizes!
See More Tournaments
Socialtournaments.com is a free to play social casino designed to let players try our games before they decide to play for real money wagers with licensed B2C operators. Players are not eligible to play where free play games with prizes are prohibited. Socialtournaments.com is unlicensed.
Special 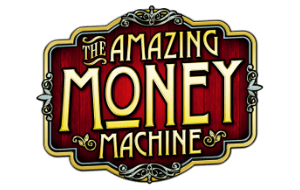 The Amazing Money Machine is packed with surprises shaped as exciting features, Money Symbols, or Jackpots! The male and female aviators, the main symbols of the game, are in charge of turning on the Money Machine, which can randomly award Wild, Mystery, or Jackpot symbols on any spin.

Fuel up the Money Machine, and watch the gears turn to your advantage in this new videoDemo Pragmatic that comes with a top award of 5,100x the bet!

The Amazing Money Machine Demo Pragmatic holds a dynamic reel setup that can change its format as a result of a feature. However, the game opens with a 3×5 default format, with 10 active paylines. The RTP has a stable value of 96.42%, while the volatility remains high.

If the grid changes in size, displaying a 4×5 layout, the number of active paylines increases to 30, while with a 5×5 grid, you will be playing on 60 paylines.

The symbols depicting two pilots, a gun, a set of rockets, a flying machine, and a pair of aviator goggles are the high-paying symbols hitting the reels:

The Wild Symbol looks like a shiny, diamond heart that can land on all reels, paying up to 50x the stake for five on a payline. This symbol can also substitute for all the other ones, but the Bonus and the Money Symbols.

The Bonus Symbol depicts a clock with a million gears and engines with the word JACKPOT across it. This is the missing piece of the Jackpot Bonus Feature. It is the key to triggering the bonus round that can give you access to one of the four Jackpots.

Besides the standard symbols mentioned above, The Amazing Money Machine also features a few types of Money Symbols, each with its role in our slot. The classic Money Symbol looks like a clean golden coin. It can land with a random money value based on the current bet. The golden coin with an interrogation mark might be considered intriguing as it reveals its value at the end of the Respin. This is the Mystery Wild symbol that can land only in the Respins round.

The Wild Money Symbol looks similar to the classic Wild Symbol but has different functions. During the Respins round, it carries a random money award revealed only at the end of the feature.

The Jackpot Money Symbol hits only in the Respins round, filling the Jackpot Meter on the left side of the screen. You need three such symbols to fill the entire meter and play the Jackpot Bonus Feature.

The Instant Jackpot Symbol can make your dreams come true by triggering the Jackpot Bonus randomly, on any spin.

The Amazing Money Machine is fueled by the machine present on the left side of the screen. It can throw random symbols, triggering the Money Respins round or the Instant Jackpot Feature. However, the bonus rounds can also be activated by the human hand (or spin).

This feature is tied to the way the game works. It can land random symbols on the reels in the base game or during the respins, replacing the symbols already present on the grid. The machine adds specific symbols, depending on what feature is active:

You can activate this round with any five Money Symbols on the screen. If you manage to land three Money Symbols of any kind on the middle reel, you are in luck! The size of the grid expands randomly to a 4×5 or a 5×5 format for the current spin. Also, if there are two more Money Symbols present on the reels, the Money Respins Round is played on the expanded grid. Thus, the new layout comes with more paylines and with the possibility for more Money Symbols to land.

Just like the respins rounds available in other titles from our portfolio, such as Great Rhino Deluxe or Aztec Gems Deluxe, The Amazing Money Machine slot comes with a specific grid in the respins. The standard paying symbols vanish from the screen, being replaced with empty cells. This way, the round starts with the grid filled with blank spaces and the Money Symbols that triggered the bonus.

As mentioned above, the Respins Feature can be played on a 3×5, 4×5, or 5×5 format. However, the reels will not change their layout if you land three Money Symbols on the third reel during this bonus round. This is the bad news. The good news is that the Amazing Money Machine from the left side of the screen is active during the Money Respins. It can place Money Symbols in the empty cells, helping you fill the screen with Money Symbols.

Moreover, the Jackpot Bonus Feature can also be activated in this round. All you have to do is hit and collect three Jackpot Money Symbols. The newly triggered bonus round will start after the current one ends.

Also, the Money Respins Feature ends in two situations: when you run out of Respins or when you cover the screen with Money Symbols. In the first case, the game adds all values present on the reels, awarding the total amount. In the second one, the game triggers the Money Respins round, with five Respins. Every ending truly is a new beginning.

There are three ways to trigger this feature in the Amazing Money Machine slot:

The Jackpot Bonus Feature is a pick-and-match kind of feature. You will have to match four Jackpot symbols in order to receive the corresponding jackpot. There are four available jackpots: the Mini Jackpot of 25x the stake, the Maxi one of 50x the bet, the Major Jackpot that awards 500x the stake, and the Grand one, with a top prize of 5,000x the stake.

You can turn on the Amazing Money Machine for as little as €0.20. If this bet does not suit you, you can access the Betting Menu and adjust the bet and the coin’s value. The bet ranges from 1 to 10, while the coin’s denomination can go as high as €1. Thus, we are looking at a maximum total stake of €200.

The top award in The Amazing Money Machine is worth 5,100x the stake. You can get to this amount in the base game or during the bonus rounds. So, basically, the max prize is available at all times. However, if you reach the top prize during one of the features, the round ends immediately, as all additional wins (if any) are forfeited.

The symbols, along with the entire concept of the game, based on a retro-futuristic machine, fit into the steampunk theme perfectly. The gameplay is strongly linked to the title, as the expandable reels, the features, and the machine with a Jackpot meter from the left side, are the components of the Amazing Money Machine.

The soundtrack adds the finishing touches to the landscape, taking us back to the 19th century when inventors were trying to revolutionize the world with their (then) innovative mechanisms.

The Amazing Money Machine slot can be considered a gem in the steampunk genre. With a gameplay based on a mechanism that randomly adds more symbols on the reels or even changes the size of the reels up to 60 paylines, this online Demo Pragmatic allows you to enter a universe of Money Symbols, gears, and jackpots. The top award of 5,100x the stake can be reached both in the base game and during the bonus rounds, offering multiple chances of hitting huge prizes.

Turn on the Amazing Money Machine as a slot tournament on Social Tournaments. Create an account and play their slots tournaments for free to win some juicy cash prizes!